Given the difficulty with version control, we don’t expect you to actually start using it yet… It took me (Luke) months after I learned about it before I actually started using it. 😄

At the end of this session you will be able:

What is version control? 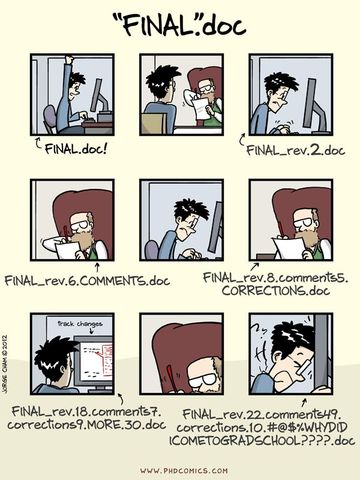 Version control is a system that manages changes to a file or files. These changes are kept as logs in a history, with detailed information on what file(s) was changed, what was changed within the file, who changed it, and a message on why the change was made. This is extremely useful, especially when working in teams or for yourself 6 months in the future (because you will forget things)!

To understand how incredibly powerful version control is, think about these questions (or refer to the comic above!): How many files of different versions of a manuscript or thesis do you have laying around after getting feedback from your supervisor or co-authors? Have you ever wanted to experiment with your code or your manuscript and need to make a new file so that the original is not touched? Have you ever deleted something and wish you hadn’t? Have you ever forgotten what you were doing on a project? All these problems are fixed by using version control (git)! There are so many good reasons to use version control:

In this session we are going to go over a typical workflow. This could be either a solo workflow or a collaborative workflow. It will also mostly entirely be done through RStudio.

Git is a version control system and program. It contains many commands that you can use to track and manage your files and changes to those files. It has many features that make it ideal at tracking changes and for use in collaborative settings. But because it was created by Linux developers, it isn’t always easy to understand or use. If it’s so hard to learn, why should you learn Git? Well, because:

Setting up your Git configuration

Since Git tracks who did what to your files, it needs to know who you are. So let’s get you set up! Open your R Project and open a terminal using Alt-Shift-T (or "Tools->Terminal->New Terminal"). Then start typing:

We’ll mostly work in RStudio with Git, but sometimes you may have to use the terminal and interact with Git using the [nano] text editor.

Four (or five) concepts in Git (and ~11 main commands)

Almost all of these Git commands can be used through the RStudio Git interface! For those commands that can’t, we’ll use the built-in terminal in RStudio (note, not the R Console) to access the Git commands.

Setting up a Git repository

First off, what is the Git repository? Remember how your project folder is set up. There are actually several hidden files for Mac or Linux users or files starting with . for Windows users. There are two important files/folders that relate to Git, the .gitignore file and the .git/ folder:

The .gitignore file tells Git to ignore tracking (or “watching”) certain files while the .git/ folder contains all the changes and history for this folder… This folder is the repository! Everything related to your project is found in that folder, so don’t delete it!

To set up a repository we can either initialize immediately when we create a R Project from the “New Projects” setup instructions. Or, if we already have a R Project started we can use:

During the session we’ll go over this image that goes over the different “stages” in Git. There are basically four “stages” for files and changes:

We won’t be using the Git commands listed in the image. They are there for reference.

When we cover GitHub, we’ll need to go over some additional concepts and commands. When dealing with GitHub, we have the concept of “remotes”. A remote is a location for the Git repository other than the one you are working on. So in this case, the GitHub location of your repository is called the remote. A remote can be anywhere, including on other version control services like GitLab. 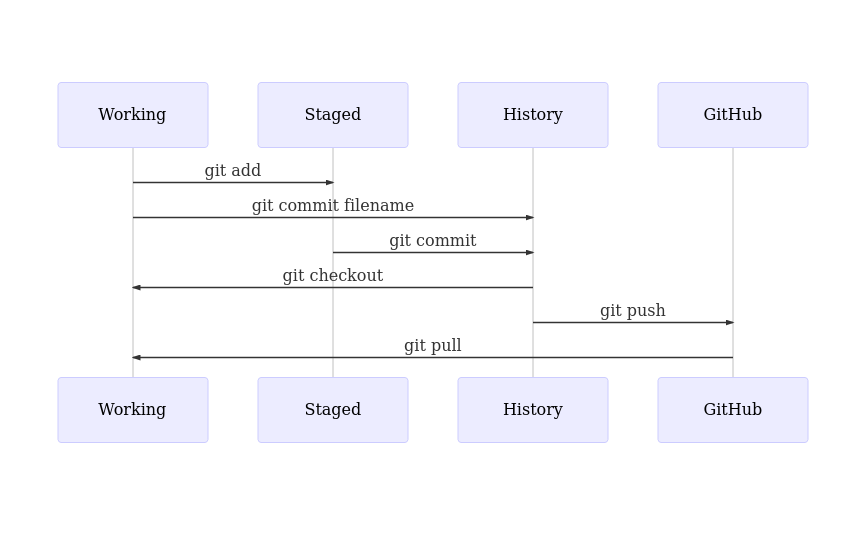 Resources for learning and help

For Git within RStudio:

For Git in general:

Many parts of this were taken from my lessons, given while with the UofTCoders.